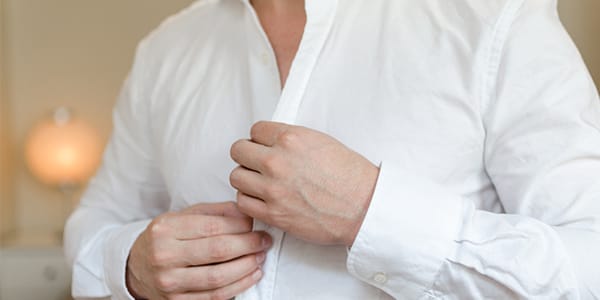 Ready for vacation - With the casual linen look you are perfectly prepared!
Some items of clothing immediately trigger vacation and summer feelings in us. This can be shorts, the favorite straw hat or even linen shirts. And who doesn't love to look at the many colorful men's linen shirts on vacation, dangling from the ceilings of the stores during an evening stroll?

Other items in this category »
Cookie preferences
This website uses cookies, which are necessary for the technical operation of the website and are always set. Other cookies, which increase the comfort when using this website, are used for direct advertising or to facilitate interaction with other websites and social networks, are only set with your consent.
Categories

How are linen shirts made?

Are you wondering what linen is actually made of and how the raw material becomes a shirt? The origin of linen fabric is the fiber flax or also called flax plant. Large areas of flax cultivation are found in Europe (especially France), China and Russia. To produce fabric from this undemanding and therefore sustainable crop, the long fibers suitable for fabric production are separated from the rest of the flax plant by roasting, breaking and subsequent waving. The natural fiber is gray-brown and is brought to the desired color by bleaching and subsequent dyeing. The flax yarn thus obtained is now woven into a fabric in the same way as other yarn. The resulting outer fabric is now used to sew the linen shirts.

Our purchase tip - the airy linen shirts for men

Stylish gentlemen go for a white linen shirt with a long button placket and jeans shorts or chinos in blue or beige on hot days. High-quality leather jewelry and summery espadrilles in matching colors conjure up a sophisticated vacation look in no time at all.

If you want to add a splash of color to your outfit, you can quickly put together a bold outfit with Etno prints on your linen shirt.

Summer, sun, linen! True world explorers are not deterred by hot temperatures and always keep a cool head. Their secret? Breathable linen shirts that not only look super casual, but have turned out to be real multi-talents thanks to their unique characteristics. While linen shirts score with their cooling effect in summer, the fabric wonder gives the shirt wearer a comfortably warm feeling on the skin in winter. The trick: in hot weather, the linen fiber absorbs moisture from the environment and provides a pleasantly fresh coolness. At low temperatures, when the humidity drops, the mechanism works in reverse, so that the fabric is perceived as warming.

If you always want to start the day without wrinkles, you won't be very happy with a linen shirt, because the linen fabric lives precisely from this unusually casual wrinkle look. If the shirt is too wrinkled for you, hang it in the bathroom during a warm shower - this works wonders.

And even those who like to lean back when it comes to washing and styling should have at least one men's linen shirt in their casual wardrobe. The lint-free nature of linen shirts makes them an uncomplicated partner in all situations. Insensitive to dirt, linen shirts do not need to be washed after every wear, here it is enough to air them out in between.

Many possible combinations with linen shirts

In casual combination with a dark chino, rolled up trouser legs and modern leather loafers you are always sure to get the looks of women! Also as a keypiece for a beach look, linen shirts can be worn perfectly with swim trunks. With a cool drink in your hand and a casual saying on your tongue, not only the fashion world is open to you. However, linen can not only be casual, but also smart casual: jackets and suits made of linen are the hottest trend and paired with a classic business shirt are absolutely suitable for the office as well as for external meetings.

In addition, our current fashion tip for cooler summer evenings: White denim pants combined with a brick red or coral linen shirt, along with open-toed leather sandals. Linen shirts for men are extremely sturdy and therefore hardly stretchy. They are almost never skin-tight, but rather casual on the body. However, this is precisely what makes a perfect linen look, with which you can defy the heat of summer. Because due to the nature of the fabric, linen shirts are cooling, tear-resistant, dust and dirt resistant as well as antibacterial and are therefore also particularly suitable for allergy sufferers.

A shirt made of linen feels wonderfully cool. This is because the fabric has a high thermal conductivity. It's a bit like the 'cold' feeling that metal gives. Flax does not attract dust. This means that no lint sticks to the shirt. Therefore, the fabric has a smooth texture. Linen shirts become softer the more they are washed. The "linen shirt" requires a little more work when ironing. Due to its structure, Vlax has a low elasticity. The bounce is not easy.

Linen - all advantages at one glance:

Linenshirts for men: chic and cool

Linen shirts are very popular in warmer weather. Linen shirts are special because they are more difficult to make than regular cotton shirts. It is made from flax, a type of fabric that is hardly processed with chemicals. A "linen shirt" belongs in every man's closet. Linen has the ability to absorb moisture and dissipate heat. Good for the warm weather.

The story of linen

Linen almost became the standard material for men's shirts and blouses. It was discovered as early as 36,000 years ago. This was proven by excavations. Even the people in Stone Age used linen or flax to make clothes. In the Mesopetanian period, linen became popular. It was even the standard in clothing. In Egypt, it was used as clothing for daily use. Since then, linen has been the standard for bed textiles, tablecloths, as well as men's shirts.

The production of linen

The fabric linen (or flax) is mainly produced in Europe. Ireland and French Normandy are traditionally known as important producers of linen. In the 17th and 18th centuries, linen was widely used as a garment in Europe. This was in the form of linen shirts or linen blouses. The production of linen is very labor intensive. The linen threads must remain neatly upright. They can be quickly destroyed by a machine. This is also the reason why linen eventually overtook cotton. The production of cotton was facilitated in large quantities.

The structure of flax

Flax is a bast fiber. These fibers have a greater fiber length than cotton. Linen, for example, is between 25 and 150 mm long. Roughly speaking, 2 types of fabrics can be distinguished. Thin fibers and long fibers. The thin fibers are suitable for the production of high quality linen shirts. The thicker fibers are found in tablecloths and bedding. The flax fiber or linen fiber is characterized by numerous surface irregularities. Many polygonal shapes can be recognized. These contribute to the coarse texture of the fabric. Therefore, a linen blouse looks a bit more playful and casual.

The procedure of the production

The quality depends on the production method used and the growing conditions. In the production of linen, the goal is to produce the longest possible fiber. Therefore, the flax must be cut by hand, as close to the root as possible. This is to ensure that the longest possible fiber length is achieved. After harvesting, the plant is dried. The kernels are also removed. This process is called threshing. After this, the fibers must be separated from the stalk. In the past, this was done with chemicals, but today it is prohibited. The flax fibers are then passed through a comber. This produces a soft flax yarn. They are then woven or knitted into linen textiles. This fabric can be used for a linen shirt, for example.

Where is linen produced?

Linen is mainly produced and grown in China and Europe. In Europe, there are strict environmental and quality requirements. Therefore, the high quality shirts are made from linen grown in Europe. Especially in Normandy and Ireland, a lot of linen is grown. This is still done in a very labor-intensive way.

>> Show all polos- and shirts

Signup to newsletter & get 10% discount!

Hemden.de uses cookies to provide a secure and reliable website and to better design the website and advertisements on the Internet according to the interests of our visitors and to improve the shopping experience. For this purpose, we use information, including data on the use of the pages as well as on end devices. To do this, we need your consent, which you can revoke at any time. By clicking "Accept all", you allow us to use the cookies described in more detail under "Settings". You can adjust or refuse your consent there at any time. Further details can be found in the data protection information. To our privacy policy.

You accept the following cookies by clicking on Accept all. You will find further information in the privacy settings, where you can also change your selection at any time. Just go to the page with the privacy policy.

Technically necessary cookies (from Shopware and Google Tag Manager) enable a website to save information that has already been entered (such as user names, language selection and shopping cart) and to offer the user improved, more personal functions.

These cookies (from Google Analytics and Google Audiences) are used for statistics to optimize shop performance.

Marketing cookies (from Google Ads, Google Double Click, Microsoft Ads, Facebook Ads, AWIN, Channelpilot, Loopingo, CMC Dialogpost) are used to serve ads that are relevant to your interests. When you visit another website, your browser's cookie will be recognized and selected advertisements will be displayed to you based on the information stored in this cookie. If you reject the use of cookies for advertisements, you will not see less advertisements, but the advertising content is no longer adapted to your interests.